I feel like this birth story is a bit of a birth mini-series so bear with my long-windedness, but more than anything I want to share God’s faithfulness during my pregnancy.

All along we had been concerned about him getting too big with my gestational diabetes, but at his 36 week ultrasound he had leveled out to more of an average size and his weight wasn’t a great concern.But at that appointment he was still breech/transverse so my doctor said we would give it two more weeks and do another ultrasound. If at 38 weeks he was still breech we would need to decide about trying to turn him manually or moving ahead with a c-section.

Around this time too we were moving and my stress levels were through the roof. I definitely did NOT want to do a c-section, more because of the recovery time with two kiddos than anything else. So I called my chiropractor (Bernath Chiropractic and Wellness — for anyone local) and started appointments to help. Also, got on the good ole google and started doing some stretching/yoga-ish moves to help. I wanted to feel confident that I had done all I could do to get our little one into a good position and hopefully avoid a c-section.

During these weeks I really struggled with anxiety over so many unknowns.

“What if Nate could only have a few days off work?” “What if we tried to manually turn the baby and there were problems?” “What if I couldn’t lift Barrett up and down from his crib after a c-section?”

I felt like my mind was running a thousand miles a minute with all the problems and trying to find solutions to every potential situation. One night after the kids were in bed and when Nate was working late, I sat down and wrote out all the things that were causing me stress. A full front and back page of pouring out my heart later, I began to pray over each stressor, claiming the promise of “casting all your care upon Him because He cares for you.”

At the end of an emotional prayer time I claimed this verse: “If God hadn’t been there for me I never would have made it. The minute I said, “I’m slipping, I’m falling,” Your love, God, took hold and held me fast. When I was upset and beside myself, You called me down and cheered me up.    -Psalm 94:17-19 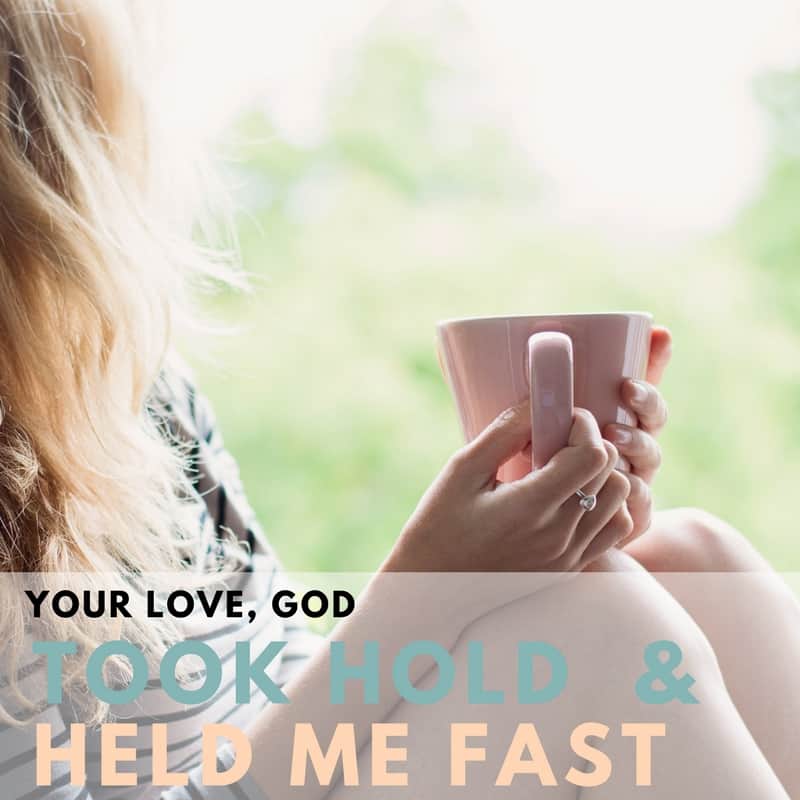 I also left this time with this sweet whisper from the Lord, “Your baby is not a problem to be solved, but a person to be loved.”

I needed to step back and just love my baby and let God solve the problems.

Then at my 38 week appointment the ultrasound showed Griffin had turned and was head down!

I went in for my 39 week appointment on Tuesday. I did a non-stress test (I had been doing those since 35 or 36 weeks) and during the test the assistant mentioned that I was having some mild contractions showing up on the test. I’d been having Braxton Hicks off and on for a week so it didn’t really phase me at all, but then when my doctor checked me I was dilated to 4 centimeters and she told me she thought I would probably be having our baby soon, so just go home and wait for the contractions to get stronger and come back in.

Woohoo! I felt very surreal but I called Nate so he could get some things in order at work and called to make sure we had childcare set up for the other kids. It was a flurry of excitement. The contractions continued to hold steady, and then got a little stronger so we decided around 5:30 to head into the hospital. But first things first, we stopped and got Qdoba. Because hospital food. And because we were already paying for a babysitter.

Well good thing we turned it into a date night because literally when we stepped into the hospital it felt like the contractions lessened, slowed, and stopped. Total false alarm! 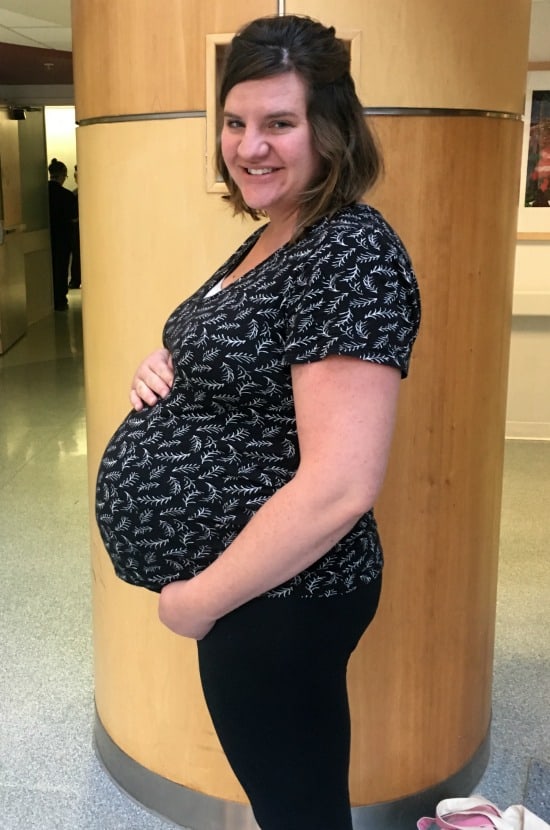 So back home we went. And Wednesday was super-normal and I tried to keep myself busy with the kids and not be disappointed we didn’t have a baby yet. My mom had already rearranged  her schedule so she decided to keep her plans to come up early for Labor Day weekend (she and my dad were already coming Friday-Monday) and got to our house Wednesday night.

Wednesday night and Thursday morning I didn’t feel Griffin moving as much as normal. So I drank juice and ate chocolate (<<<normally these would spark him right up since I rarely ate anything that sweet because of Gestational Diabetes) and I still felt like his movements were not what they should be. So we called the hospital and they said to come on in and we could do a non-stress test. So we headed back to the hospital. As soon as I was on the monitor the nurse said that Griffin’s heart rate looked great and he started to pick up and have some good movements too.

I figured we were out of there, but then she asked me if my feet were swollen at all.

Then she asked me if I had any severe headache, or was seeing any spots or having any sharp pain on my right side under my ribs.

She read off a high number, but she reassured me that it could also be because I was worried about the baby’s movement. “So just sit back and relax and we will run some tests while you are here” she told us.

Long story short, we were there for quite a while (people having babies and whatnot keeps the medical staff busy ????) but my tests all came back clear, but my blood pressure remained pretty high, so they sent me home with instructions to take my blood pressure a few more times and to collect a 24 hour urine sample which I would bring back to the hospital the next day to be tested again. #classy

My blood pressure numbers were fine that night so it seemed like we were probably in the clear. The next morning my mom, dad, and I took the kids to a local apple orchard/family fun spot that was also having a vintage market. We shopped and did some of the fun activities in the morning, then we came back home and ate lunch at camp. We needed to be back at the hospital at 3:00 so we packed our bags and Nate cleaned out the car, just in case.

We got checked in again at the hospital and my blood pressure was still a little high, but not crazy. They re-ran tests and put me on the fetal monitor. Around 6:00 we got my results back and my I was officially diagnosed with preeclampsia and we were moving forward with an induction.

Thankfully, I was able to order dinner first. #priorities

Since the shift changed at 7, we waited to start the induction until closer to 8:00. I knew we were in for a long night. I was also excited to break out my Magnolia Home Journal which I had bought a couple weeks before to read during an induction, just in case. ???? My contractions were moving pretty slow so at midnight the doctor broke my water and then, things really started moving. Things got moving for my epidural and while the contractions were intense I’d like to say that I did my best job with pain management/breathing. Still, the anesthesiologist was a VERY welcome sight! My epidural went off without a hitch (compared with Barrett’s where the first one didn’t take-awful!) and I was quickly at 9 centimeters, then 10.

So I was started to feel the urge to push, but my epidural was working too well, one of my legs was practically dead. The nurse turned down the epidural flow so I could get back some feeling and be ready to push. Finally around 3:30 (maybe? I really don’t remember) I started pushing, but my contractions had slowed down so it was a lot of waiting between pushes, so then they turned the pitocin up. And then a few more pushes and our sweet little Griffin was born! 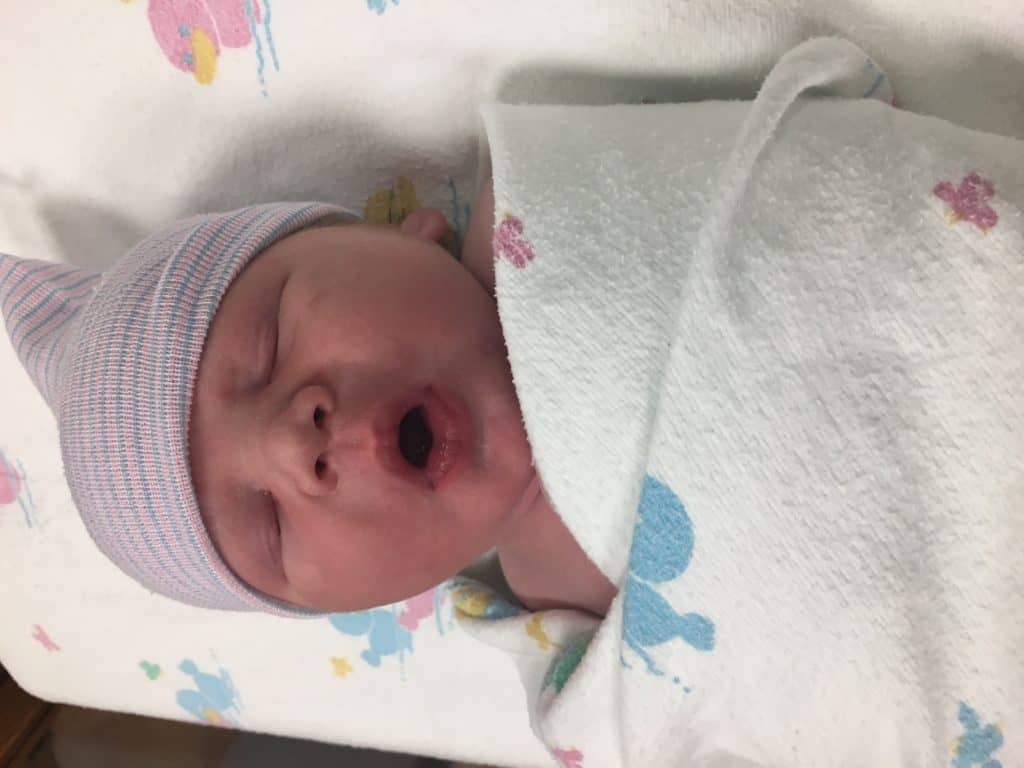 We were able to do immediate skin to skin and Nate cut his cord. Those first moments are so precious. He had so much hair and was utterly perfect. He nursed soon after and we got to spend the next hour or so cuddling and/or trying not to fall asleep. We were all so exhausted!

Griffin weighed 8 pounds 5 ounces and was 19 inches long. They also did a blood sugar check an hour after he nursed and his numbers weren’t good so I needed to nurse him every two hours. And thus began the blood sugar roller coaster. Eventually on his first day we needed to supplement Griffin with donor milk after each feed to try and get his sugars up. On Monday his numbers still weren’t going up so in the afternoon he was put on a dextrose iv to bring his levels up. This meant he moved into the nursery and I was discharged, but we were still able to stay at the hospital as a “boarding mom”.

It was painful to see him hooked to an IV and wired up with monitors, but we had amazing doctors and nurses who were very proficient and kind. This issue, although serious, generally resolves itself in 48-72 hours as the baby’s body learns how to regulate it’s own sugar without help from mom. It was comforting to know that while this was definitely not fun, there wasn’t anything seriously wrong with our sweetie that time and a little sugar water couldn’t resolve. By late on Tuesday he was stable again and they began to slowly lower his concentration in the IV. On Wednesday morning he continued on a good trajectory of maintaining higher blood sugars while receiving lowered concentration so he was able to come off the IV and be back in our room before lunch. 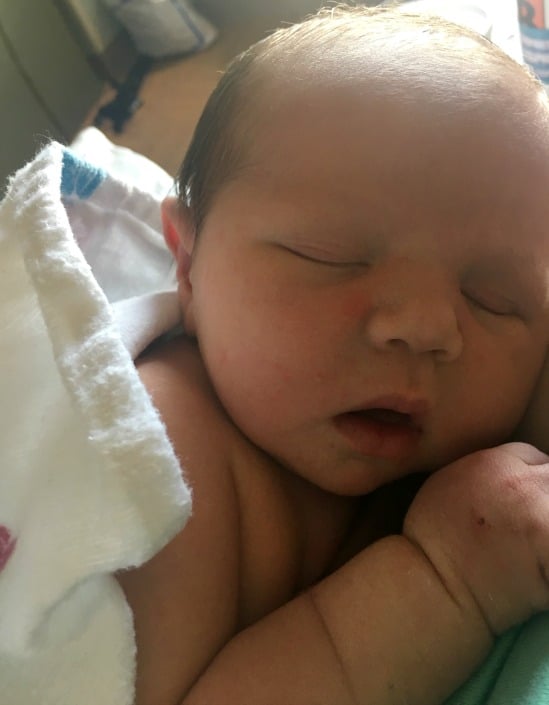 Late Wednesday afternoon, 4 days after we arrived, we made our exit from the hospital! It was so good to be home! Layla and Barrett were able to visit us every day and they were both so excited about having a new baby brother! Before he had his IV put in Griffin also got to visit his grandma and grandpa, aunt and uncles and a few friends. It was also wonderful to see God’s timing in us having a baby the weekend my parents were here so we didn’t have to rush or worry about childcare for Layla and Barrett. And my parents blessed us by completing house projects, folding laundry, prepping meals and keeping things as normal as possible for Barrett and Layla, which was huge!

We’ve spent the last week plus at home getting used to our new normal as a family of 5. God has proved SO faithful throughout my pregnancy and Griffin’s birth. 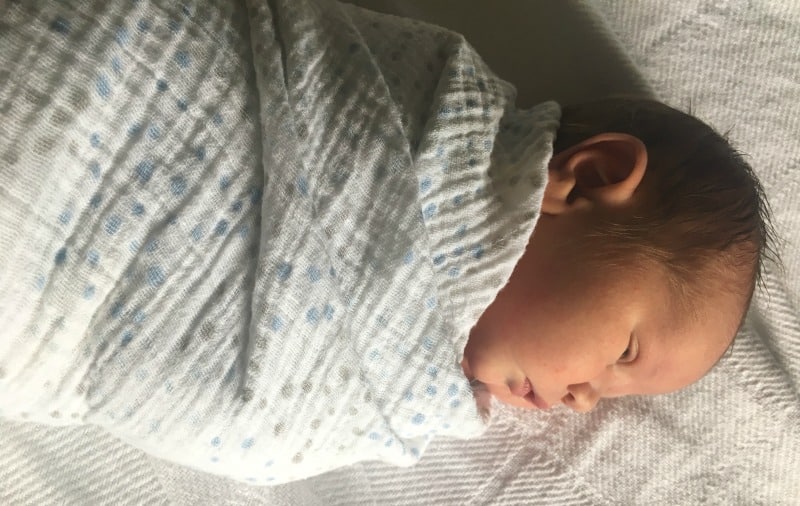 Unexpected blessings are the best kind. 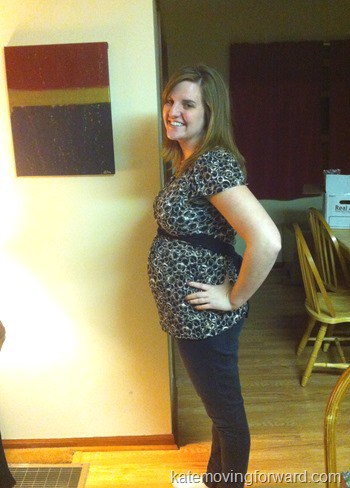 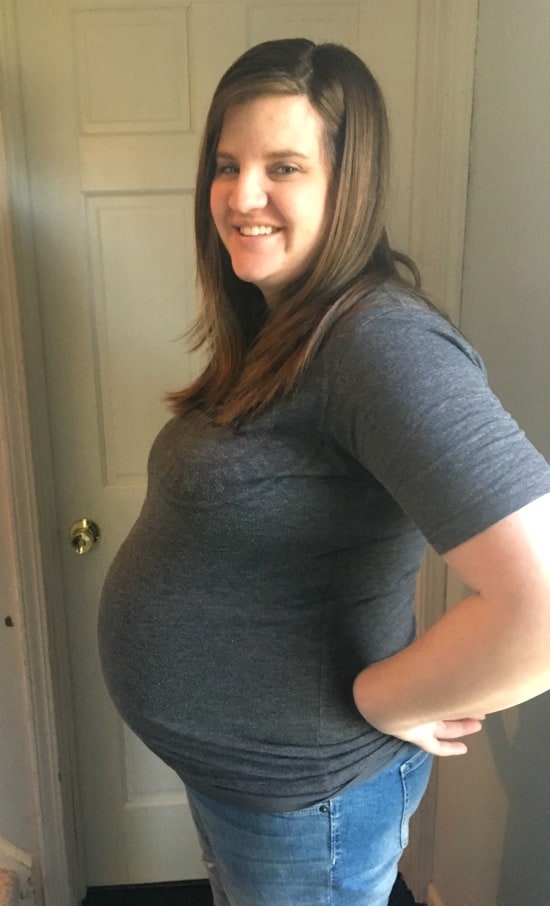 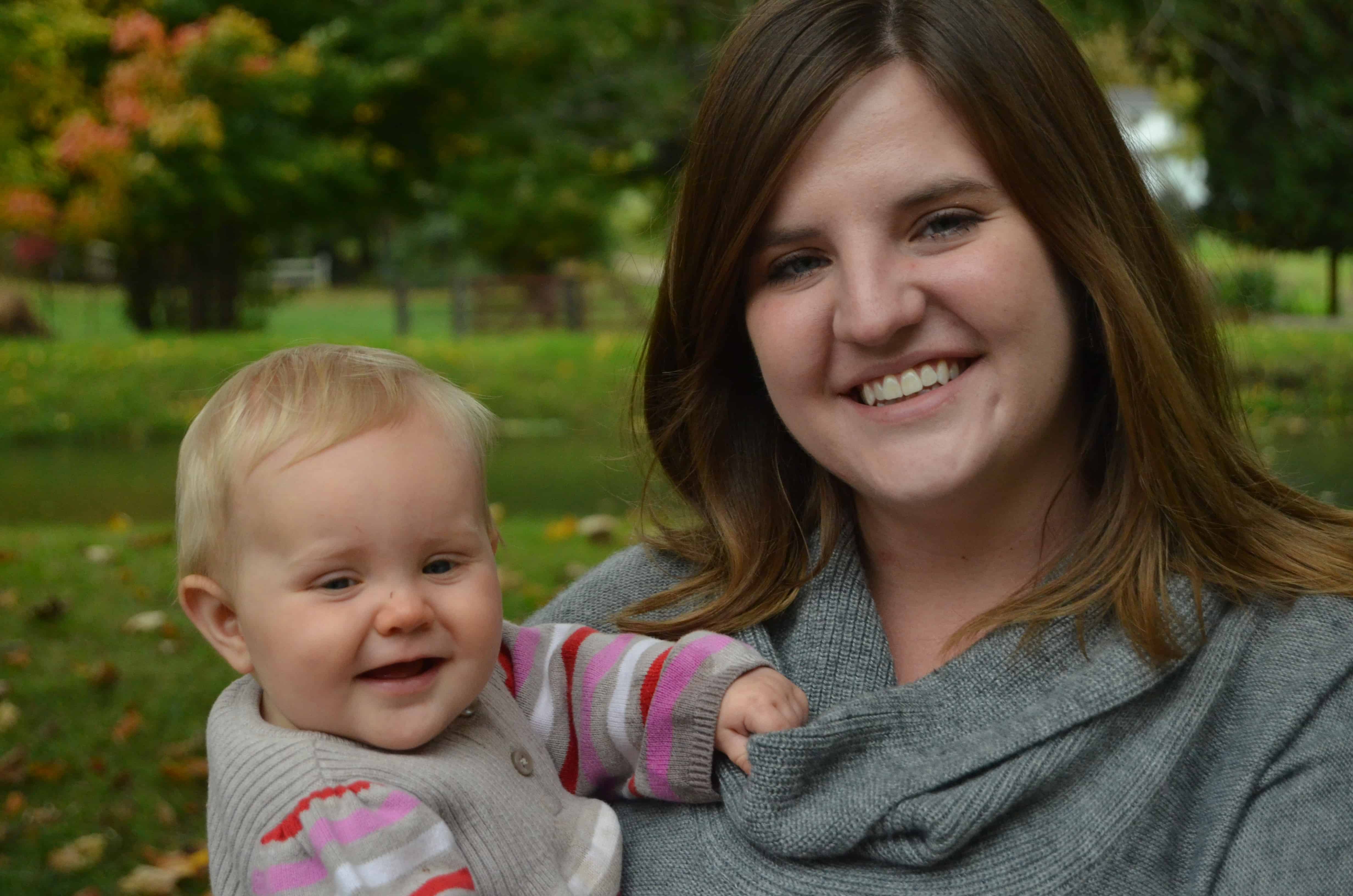 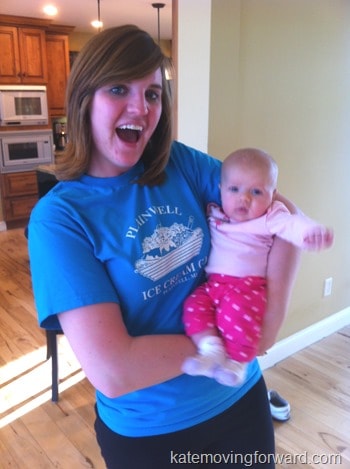 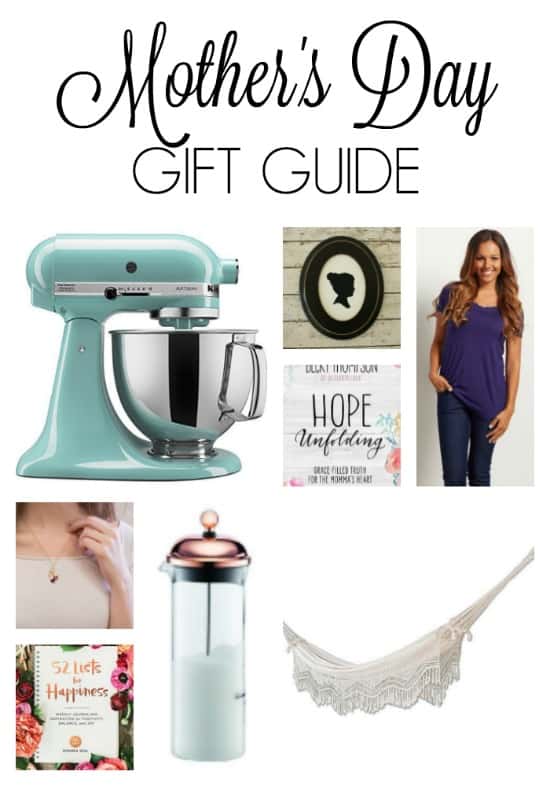 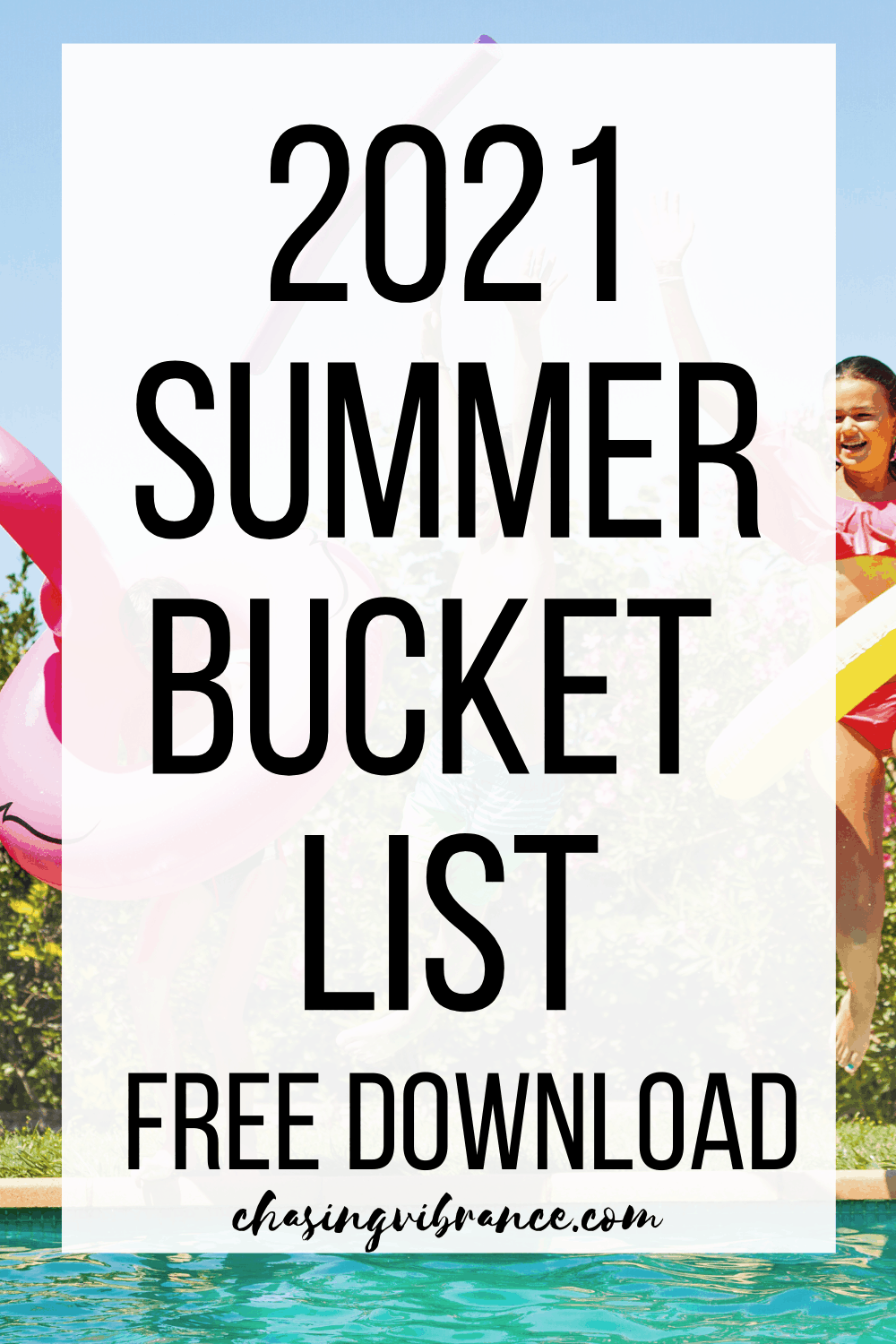